The fabulous Kelly Barson is our guest author for Truth or Dare this week! Her debut YA novel, 45 POUNDS, will be published by Viking Children's Books, Summer 2013.
A brief teaser: 45 Pounds is about a sixteen-year-old girl, Ann, who doesn’t fit—not into her blended family and certainly not into Snapz! clothes. She’s certain that if she could lose 45 pounds before her aunt’s wedding, her life would be perfectly normal. She finds out, though, that there is nothing perfect about normal.
Sounds pretty amazing, right? In the meantime, Kelly's chosen a truth submitted by blog reader Alyssa: What is your most embarrassing memory?
In my novel, 45 POUNDS, the main character, Ann, suffers many embarrassments. Unfortunately, those moments weren’t hard for me to write because I have a plethora of my own memories to draw from. The hard part is choosing just one! Since several of Ann’s embarrassing moments involve clothes, I thought I’d choose a fashion-related memory.
Around Halloween a few years ago, I wrote a last-minute skit for my church. Since I wrote it on Thursday to be performed on Sunday, there was no time to find a real cast; my daughter and I would have to do. There was also no time to find a fairy godmother costume. Again last minute—Sunday morning—I improvised. I yanked an old bridesmaid dress from the back of my closet: a poufy floral number, circa 1989. Thrilled that it fit, I was all set. But wait! The Velcro crisscross straps in the back kept coming free and flapping every time I moved.
My husband suggested safety pins. What? I wasn’t sure if we had any. Besides, I was in a hurry. Like a fashion designer pulling a scarf off one runway model and draping it on another to save the day, I would just take some scissors and remove the problem. They were just late 80s extraneous details, weren’t they? It’s not like I needed those straps. I was more than, um, ample enough to hold up the dress. Snip. Voila! Fairy godmother costume complete!
No time for rehearsal, my daughter and I entered stage right on cue. The church had an excellent turn-out that morning, as if they knew this was my acting debut. I did my part. I folded laundry as I “argued” with my daughter. I bent to pluck a towel from the basket. The dressed slipped down my right shoulder. I shrugged it back to place. With a washcloth, the left slipped. I shrugged again. Then the “doorbell” rang. As I stood, the V-neck widened and inched down my shoulders. I adjusted as I answered the door, exaggerating the motion, like it was scripted. I had this under control.
The final thirty seconds, which felt like half an hour, involved my daughter and me dancing and was supposed to be funny. Knowing how precarious my dress was, I was reserved, despite the instructions to be animated to increase the laugh. It didn’t matter. When I moved right, my dress slipped left. When I moved left, the dress slipped right. I tried to use my dancing as a vehicle for recovery, but it—along with mean old Mr. Gravity—only made it worse. But, even then, I refused to believe what was happening. I kept dancing, convinced no one knew but me.
Then I saw the church secretary’s eyes widen. Her husband, one of the elders, looked away. Scanning the congregation, it was obvious that my problem was visible beyond the front row. And not a single laugh. Then it hit me: I had not only debuted as an actress, but also as a stripper. And in church no less. After I slithered into the pew next to my husband, he whispered, “You might want to change, like, now.”
No one has asked (or should I say allowed?) me on stage since then, which suits me just fine. I’ll stick to writing. At least then the embarrassing moments aren’t my own. Except, of course, when I voluntarily expose my mortifying secrets to the world-wide blogosphere. 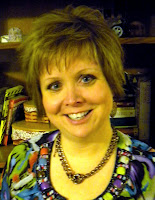 Kelly Barson graduated from Vermont College of Fine Arts with an MFA in Writing for Children and Young Adults, and is represented by Sara Crowe of Harvey Klinger, Inc. She lives in Jackson, Michigan, where she embarrasses herself publicly more than she cares to admit. You can find Kelly at www.kabarson.com, on Twitter: @kabarson, or on Facebook at www.facebook.com/pages/KA-Barson/256820997724421
Thanks so much for playing, Kelly! Come back this Friday, March 16th, to see our own awesome Shannon Messenger talk Truth or Dare. You can still submit one here!
Posted by Elsie Chapman at 6:00 AM