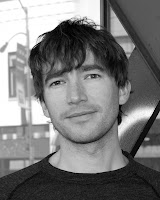 Chris Howard is our guest author for Truth or Dare this week. His debut YA novel, ROOTLESS, will be published by Scholastic, November 2012. Chris chose a dare, submitted by one of our own--April Tucholke dared Chris to write a ROOTLESS inspired song, and he did it. Happy Valentine's Day.

Hi! This is Chris, and I'm honored to be included on Friday the Thirteeners this week! Thanks for having me! I hope you enjoy the song I wrote for the main character of my debut novel, ROOTLESS. It was supposed to be a "dare" ... but to be honest I had an absolute blast working up the tune on my acoustic guitar. ROOTLESS is the first in a series of books set in a distant future where nothing can grow. The main character's name is Banyan - he builds trees out of old scrap and salvaged junk, until he finds a clue to the whereabouts of the last living trees on earth ... He's an awesome young dude, really, and he deserves a song - so thanks for inspiring me!

Chris Howard grew up not far from London, but he currently lives in Denver, Colorado. He studied Natural Resources Management in college, and spent eight years leading wilderness adventure trips for teenagers. Chris is passionate about art and the environment, and his debut novel celebrates both those things...and more. ROOTLESS will be out this November, via Scholastic Press, and Chris is currently working on Book 2 of the series. Find him here:

Next up: the brilliant Erin Bowman. She'll take the stage Friday, Feb. 17. Submit a truth or dare for Erin here.
Posted by April Tucholke at 6:00 AM