Today's Dare: Draw a map of your book's world

When I was a kid, I loved books that came with maps in them, like the Chronicles of Narnia and the Hobbit. It makes characters' adventures feel more real when you can chart their progress on a map. A few weeks ago I was doodling around while trying to figure out a plot hole, and I started drawing a map of the fictional Moreau's Island from THE MADMAN'S DAUGHTER. This turned into a bigger project where I illustrated lots of chapter headings and added footnotes, and I plan on giving away this annotated edition of the book at some later date on my blog.

And so I present: the map! I put it in the front of the book, just like my old copy of The Hobbit. 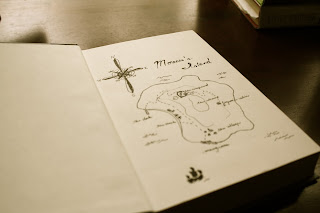 Because it's a little hard to see, I added a number guide. 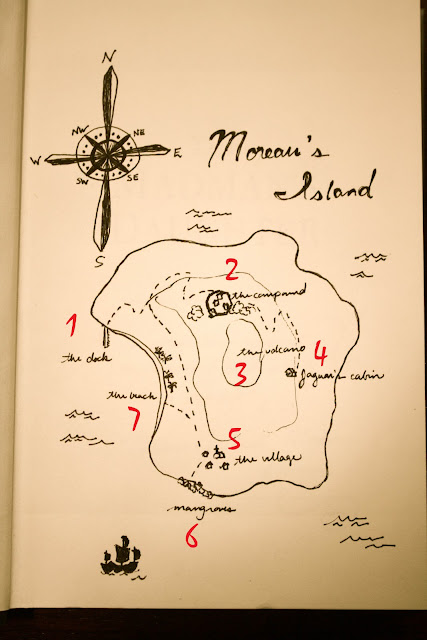 1 - The dock where Juliet, Edward & Montgomery arrive on the island
2 - Moreau's compound, formerly a Spanish fort
3 - the volcano
4 - Jaguar's cabin
5 - the Islanders' village
6 - the mangroves
7 - the beach

It was so much fun to draw this map that I'm planning on doing the same for my future books. The second book in The Madman's Daughter trilogy is set in London, and I have a great old Victorian map of London from that time, so that will be a fun one to do.

Next up is Mindy McGinnis on May 10! If you have a truth or dare for her, you can leave it here.

Megan Shepherd is a young adult writer living in the Blue Ridge Mountains of North Carolina. Her debut novel The Madman's Daughter (Balzer+Bray/HarperCollins) is the first in a Gothic thriller trilogy. The second book in the trilogy will be released January 2014. She’d love to hear from you at her blog, Twitter, Facebook, or on Goodreads.

Posted by Megan Shepherd at 6:00 AM