We're so excited here at Friday the Thirteeners because today is the publication day for Alexandra Duncan's debut, SALVAGE! Here's a little about this sci-fi feminist book, which explores choice, agency, rebellion, and family: 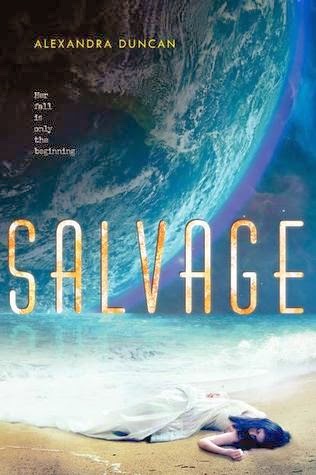 Ava, a teenage girl living aboard the male-dominated, conservative deep space merchant ship Parastrata, faces betrayal, banishment, and death. Taking her fate into her own hands, she flees to the Gyre, a floating continent of garbage and scrap in the Pacific Ocean. This is a sweeping and harrowing novel about a girl who can't read or write or even withstand the forces of gravity. What choices will she make? How will she build a future on an earth ravaged by climate change?

SALVAGE was named a 2014 Indies Introduce Pick by the American Booksellers Association, and will appeal to fans of Margaret Atwood and Beth Revis.

Kirkus Reviews said "Duncan's settings and diction are vivid," and that "haunting, colorful environments distinguish this debut novel about a girl fighting for survival in the far future."

Congratulations, Alexa! We're so proud of you and can't wait for everyone to read your amazing book!

SALVAGE is available from HarperCollins' Greenwillow Books, and if you'd like to pick up a copy (which we highly advise!) you can purchase from the following places:


And here's more about Alexandra, our friend and author of the fabulous SALVAGE:

Alexandra Duncan is a writer and librarian. Her short fiction has been published in several Year's Best Science Fiction & Fantasy anthologies and The Magazine of Fantasy and Science Fiction. Her first novel, Salvage, is available now from Greenwillow Books. She loves anything that gets her hands dirty—pie-baking, leatherworking, gardening, drawing, and rolling sushi. Alexandra lives with her husband and two monstrous, furry cats in the mountains of Western North Carolina. You can find out more about her at alexandra-duncan.com.

Posted by Brandy Colbert at 6:00 AM