In Defense of InstaLove

I know, you're probably looking at the title and thinking that there's no way Mindy is the author of this blog post. Mindy, who is so clearly acerbic and a downright instigator when it comes to the demise of the HEA. But, I think this makes me the perfect person to write in defense of insta-love in YA, because you can rest assured that I'm not being reactionary in regards to my own book. (You'll notice that Lynn and Eli don't ever say, "I love you." Why? Because- ick).

So, with that pre-disposition of ick in mind, I can still honestly defend the presence of insta-love in YA. Because even though I'm an old, bitter, cautious woman now, I haven't always been. Yes, Mindy used to fall in love, often and easily, just like the vast majority of teens everywhere... which is who YA is being written for in the first place.

Yes, teens fall in love quickly. And there's plenty of evidence to show that they really can't help it. This article from National Geographic regarding the maturation of the teen brain goes into detail regarding their risk-taking, but the last section focuses on how their changing brains function socially:


The teen brain is similarly attuned to oxytocin, another neural hormone, which (among other things) makes social connections in particular more rewarding. The neural networks and dynamics associated with general reward and social interactions overlap heavily. Engage one, and you often engage the other. Engage them during adolescence, and you light a fire.

Yep, it's true. Love is just better when you're young. Their brains are chemically predisposed to fall in love, and anyone who spends more than the average amount of time around teens can attest to this. They enter into emotionally-drenched connections with someone they truly believe is their soul mate in December, then discover in February that it's actually the girl from English class they're into. And the truth is - they probably are. I don't think it diminishes the weight or value of their love to fall into it so easily and so quickly when they are biologically predisposed to behave in this manner.

What I don't like to see in any genre is insta-love that happens as an excuse for lazy writing, with zero spark between the characters and a simple forced-upon-the-reader: These two are in love now. Fact. Most of the time when I see people complaining about insta-love it's because the writer didn't sell the relationship, not because the relationship shouldn't exist in the first place.

My other beef has nothing to do with insta-love, it's insta-stability. I firmly believe teens do fall in insta-love, but they also fall out just as quickly. It's when I see teens portrayed as meeting their one-and-only and being-blind-to-all-others-for-an-extended-period-of-time-with-no-question-of-the-happiness-that-will-extend-into-eternity that I start to get a bit pissy.

Sorry, I don't buy that.

In fact, I don't care how old the characters are.

Mindy McGinnis is a YA author and librarian. Her debut, NOT A DROP TO DRINK, is a post-apocalyptic survival tale set in a world where freshwater is almost non-existent, available from Katherine Tegen / Harper Collins September 24, 2013. She blogs at Writer, Writer Pants on Fire and contributes to the group blogs Book Pregnant, Friday the Thirteeners, From the Write Angle, The Class of 2k13, The Lucky 13s & The League of Extraordinary Writers. You can also find her on Twitter, Tumblr & Facebook.
Posted by BBC at 11:14 AM 5 comments

Email ThisBlogThis!Share to TwitterShare to FacebookShare to Pinterest
Labels: mindy mcginnis, NOT A DROP TO DRINK 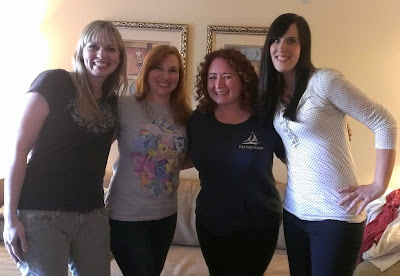 FOUR of the Friday the Thirteeners - Kasie West, Natalie Whipple, J.R. Johansson & Renee Collins - are at the Vegas Valley Book Festival this weekend!

So this week, WE dare YOU to come endure the craziness that is us! We will all be on panels and have signings tomorrow (on Saturday). You can find more information on the Festival site here.