Mindy was trapped in her home for six days recently, and decided to do a little Truthing via her Ask box on Tumblr.

Email ThisBlogThis!Share to TwitterShare to FacebookShare to Pinterest
Labels: mindy mcginnis, NOT A DROP TO DRINK, truth, Truths

Get Ready to be BLINDSIDED!!!

Wow--it's a big week for us here at the Thirteeners. We got to celebrate the awesome release of WARRIOR (by Ellen Oh) on Tuesday, and now here it is Thursday and we get to celebrate another sequel: 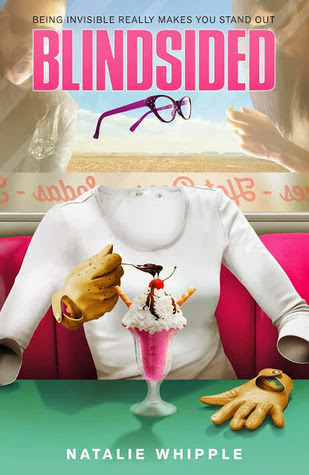 Yep--it's BLINDSIDED, the sequel to TRANSPARENT, by the ever fabulous Natalie Whipple!!!!! (I know--I can't believe we already get to read it either. Hooray for less than a year waits!)

If that adorable cover doesn't already have you dying to get your hands on a copy, here's the official summary from goodreads:


Three months after Fiona escapes from her father's syndicate, all seems well in her tiny town of Madison, Arizona. She and Seth are happy together - apart from the teensy fact of Fiona being jealous that Seth can see through her invisibility - and her family and friends are safe. But when the local syndicate and even the Army show up, it's clear there's more going on in town than she could ever imagine. It seems like these huge powers are interested in the old Radiasure factory - could they be reproducing the infamous drug that caused mutations? - and everyone suspects Fiona of knowing more than she should. As Fiona and her friends try to cover their tracks, they discover that they do have some dangerous knowledge. Though at first determined to stop anyone from remaking Radiasure, Fiona learns a secret that could change everything, including her invisibility. Torn between her own desires and the greater good, Fiona might be too blindsided to see the real villain coming

If you want to get your hands on a copy, here's some handy links:

And if you would like to order a SIGNED copy, you can call and order one from the King's English--but you'll want to act fast on that one. The launch party is tonight!

HAPPY BOOKDAY, Natalie!
Posted by Shannon Messenger at 6:00 AM 1 comments