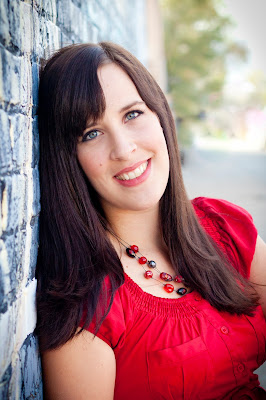 You have no idea how excited I am to introduce our FINAL Thirteener today! It is none other than one of my dearest friends—Renee Collins! This marks a very strange milestone for our little group. I can't believe we've filled all our spots, when a year ago this time we hadn't even launched our blog. It has been such a pleasure to be part of Friday The Thirteeners.

So let me tell you a little more about Ren. They really shouldn't have asked me to do this, because I LOVE humiliating my friends. First and foremost, if you need to get on her good side, all you need to do is bring her a cold Dr. Pepper. If it's on tap, even better. Second, Renee is the master of the Philosophical Journey. These basically consist of pondering upon a subject until you find some kind of meaning in all the madness. It's funner than it sounds (okay, not really).

As young as she may look, Renee is a mother to three adorable kids, and she lives with her husband in Colorado among the gorgeous red rock cliffs that partially inspired her debut novel, RELIC.

Oh, RELIC. You guys, I have so many feelings about this book. But first, the basics from the announcement:

Debut author Renee Collins' RELIC, pitched as True Grit meets The Prestige, set in a world in which the remains of long-extinct magical creatures are mined and traded on the black market in the red rock desert of the Colorado Territory for their residual magic powers, where a young girl must learn how to harness the power of relics and forge a risky alliance with a local land baron in order to survive.


This blurb only scratches the surface of how awesome this book is. Historical fantasy is becoming increasingly hot these days, with books like SHADOW AND BONE (Leigh Bardugo) and STORMDANCER (Jay Kristoff) and our own Ellen Oh's PROPHECY going outside the traditional British/European roots. Not to mention so many authors pulling from early American inspiration, such as Libba Bray's THE DIVINERS. Renee's RELIC is a perfect addition to this awesome YA genre, with its touch of magic and vibrant Old West world. Put this one on your list—it's such a fun, refreshing novel!

Okay, I think that's enough gushing. It's SO much easier to brag for my friends than for myself! So give Renee a warm welcome! We are so happy to have her, and please, leave her horrible truths/dares—she's up for her first on October 26th.